I know I posted in January that I would be making costumes for Sound of Music and I thought I would be able to post as I made the costumes through the Spring.  Uh, not possible.  So now I can go back after the production is over and go through the various costumes I made.

In the musical, the Von Trapp children gather in Maria's bedroom during a thunderstorm to sing "The Lonely Goatherd." 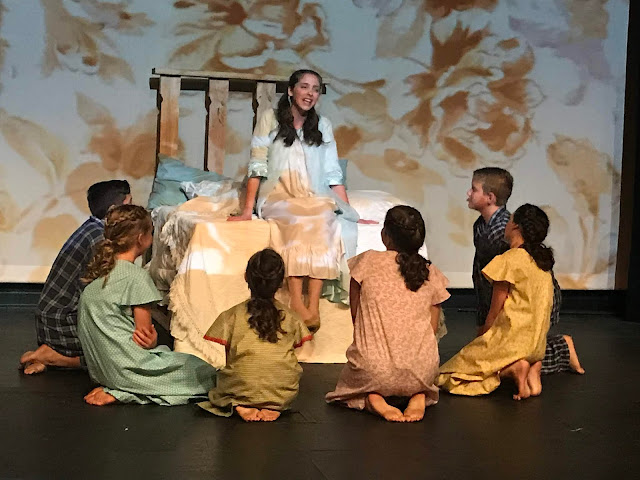 These were the first costumes I made because they were the easiest.  Bright colored cotton nightgowns in the same pattern from Simplicity: 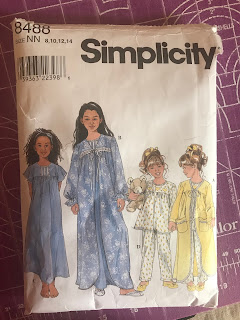 This was a great opportunity to clear some of my cotton stash and the rest I found at my favorite discount fabric store in Phoenix - SAS Fabrics.  Because I already had the pattern and some of the fabric, I was able to make all 7 Von Trapp kids nightclothes for about $4.00 per costume! 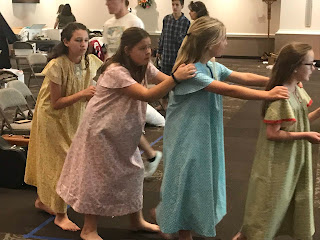 The boys' pajamas were even more interesting because I was able to find plaid cotton pajamas in men's sizes at Goodwill on half-price Saturday (about $3.00 each).  It's almost easier to choose pajamas that are several sizes too big because cutting them down is not a precise endeavor.  I took measurements at the chest, waist and hips, as well as the rise (waist to crotch).  Then the cutting began.  You want to keep the stuff that is hard to reproduce - collar, lapels and buttons, sleeves and sometimes the waistband (although I didn't use the waistband on either set I altered).

First I cut off the sleeves right above the seam. 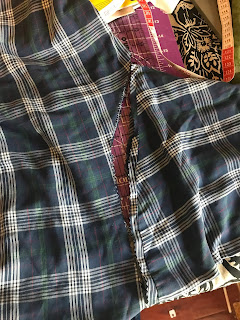 Then I cut a few inches on each side of the torso from the side seams.  Don't bother to open the seams when you are cutting this much, just cut the whole seam off (with an inch or two on the front and back) and then resew a new seam on each side. 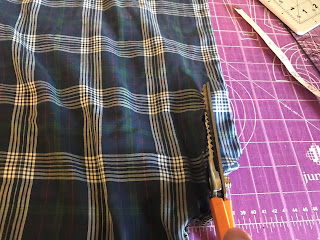 For the pants, I had to convert them from an adult large to a boy's large.  That required cutting off the waistband (because of the size of the waist and the rise between the waist and crotch being too large); cutting some of the width of the legs and cutting length from the bottom. 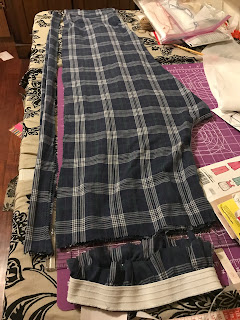 I turned the pants inside out and then folded them so the crotch was on one side and the side seams were opposite.  Then I was able to cut just an inch or two from both legs (make sure you need to cut that much!).  I needed to cut off the waistband, but had to leave enough length above the crotch to create a new casing for a new elastic waistband. 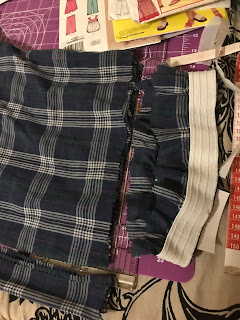 Once I finished with the other parts of the pants, I cut off the length to fit.  And that's it! 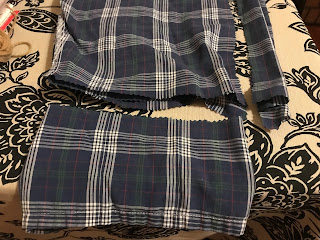 This project was perfect for me because the combination of creating something new and upcycling is very satisfying.  This was a great start to the other costumes too because I started with the easiest Von Trapp costume.  Only 4 more sets to go!