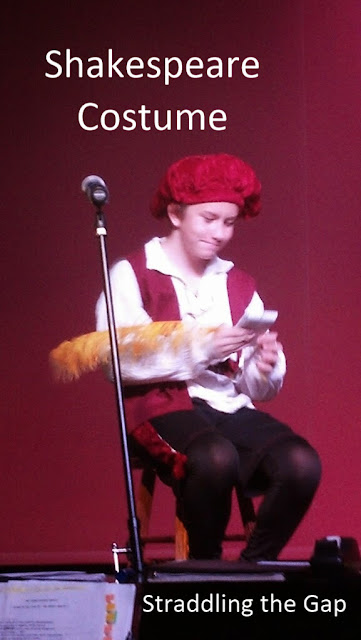 To be or not to be?  Hamlet, Act III, Scene I.  To sew or not to sew?  Christian plays Shakespeare in the modern world trying to sell his plays to Hollywood producers.  Enter stage left - a Shakespeare costume!  I considered it a personal challenge for me and Goodwill.  "Do you think I am easier to be played on than a pipe?"  Hamlet, Act III, Scene II.

I looked through lots of pictures on the internet and decided I wanted a long sleeve "flowing" shirt, a vest, tights and a slouchy beret.  I had the fabric to make the vest, so I started with that.  No pattern?  No problem!  I used one of Christian's shirts and outlined the width of the shoulders, arm holes and neck opening.  No need to be too exact - it's not fitted.  "Though this be madness, yet there is method in 't."  Hamlet, Act II, Scene II. 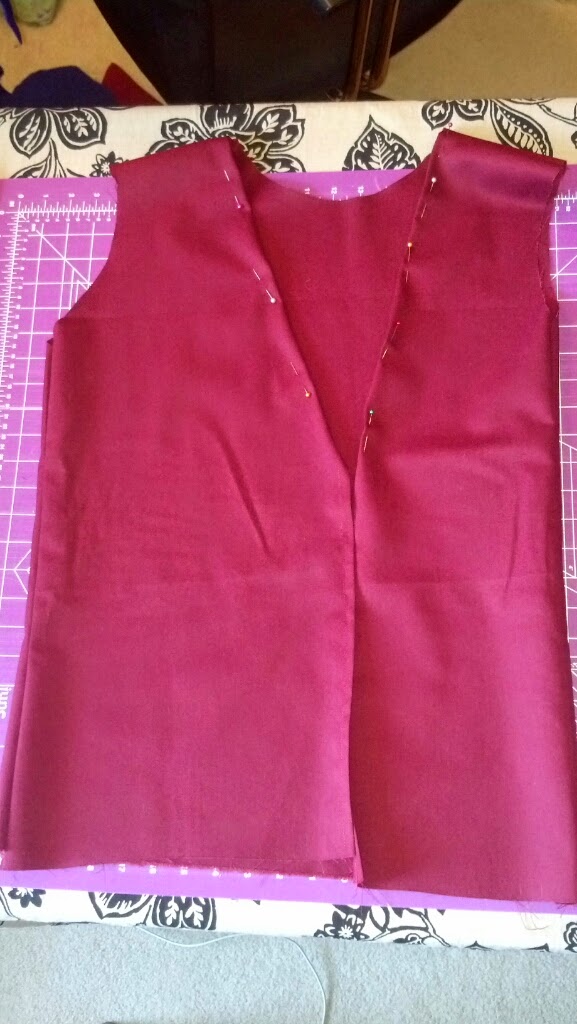 Next - on to Goodwill.  "I like this place and willingly could waste my time in it.  As You Like It, Act II, Scene IV.  I make a MAJOR score and found the perfect shirt!  I cut off the buttons, opened up some "buttonholes" and threaded some leather cording I found. 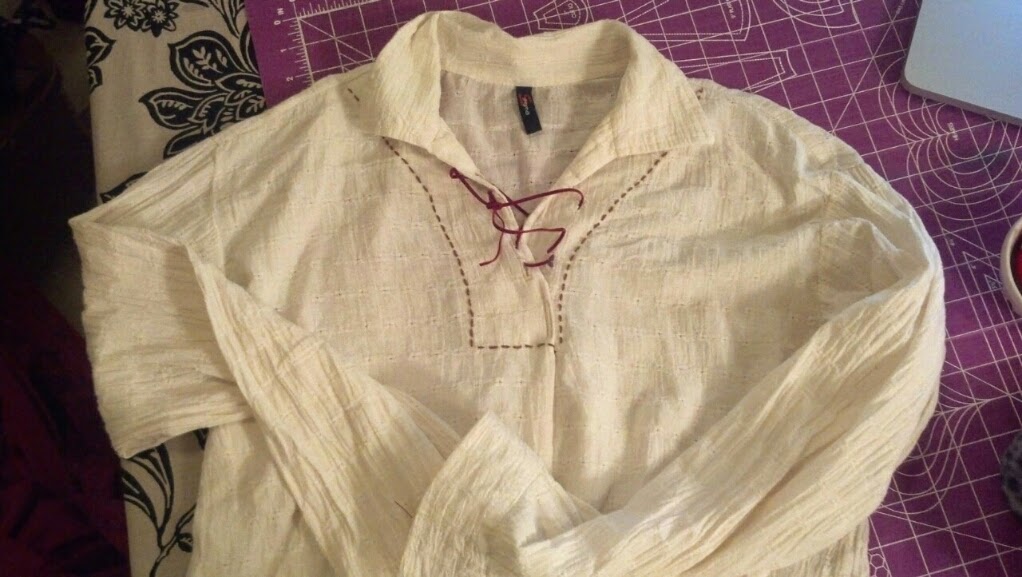 I also found some black leggings and a women's fleece slouch beret.  Finally, I found the coolest brown double belt with an elastic back for a guaranteed fit for my skinny guy.  "As good luck would have it." The Merry Wives of Windsor, Act III, Scene V.   Now back to costume construction.

I found some great maroon velvety stretch fabric I had in the closet and covered the sides of basketball shorts to wear over the tights. 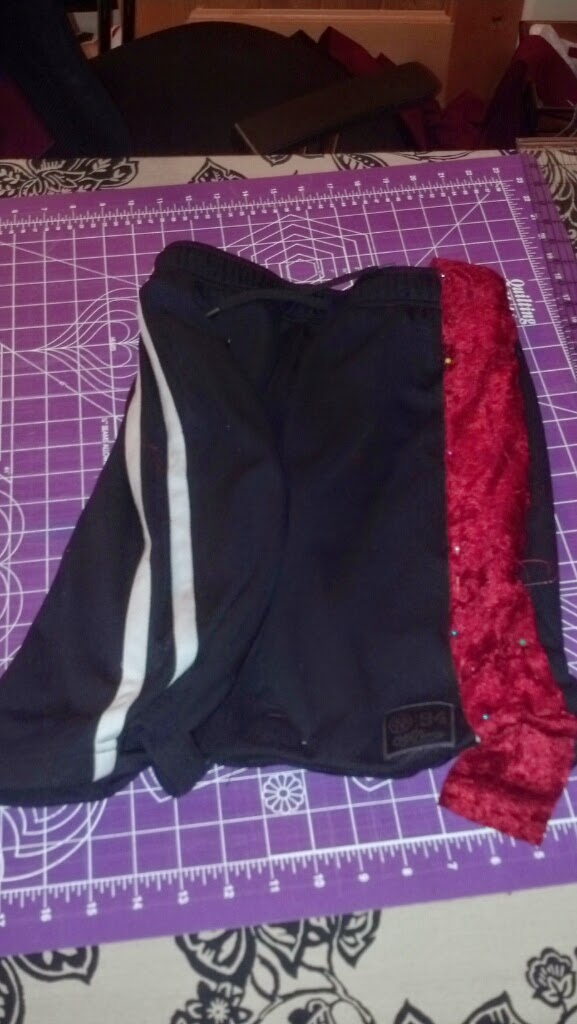 Then I covered the slouch hat loosely with the same fabric.  First I covered the band and then made a large circle of fabric that would go over the top and gather back at the hat band. 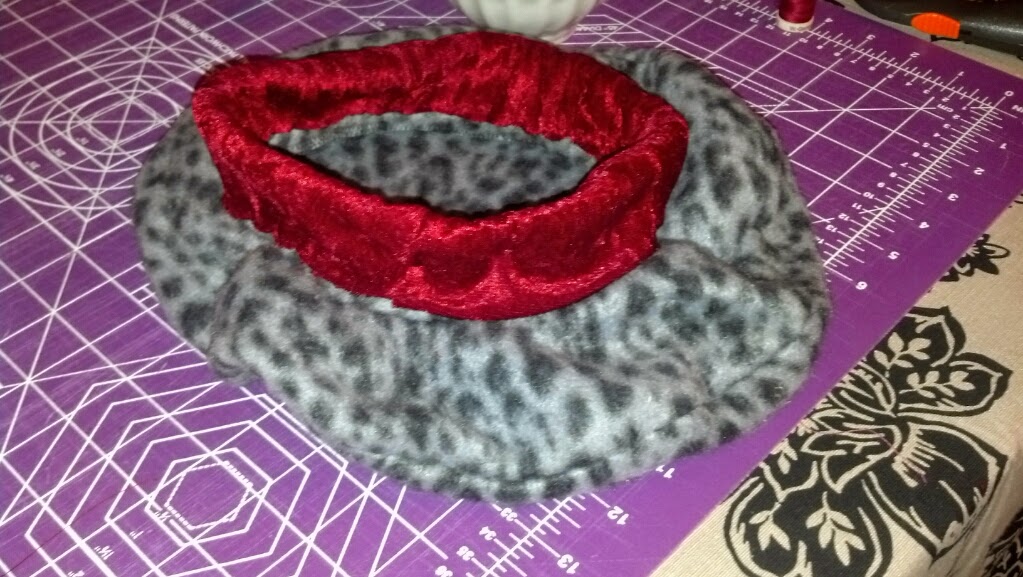 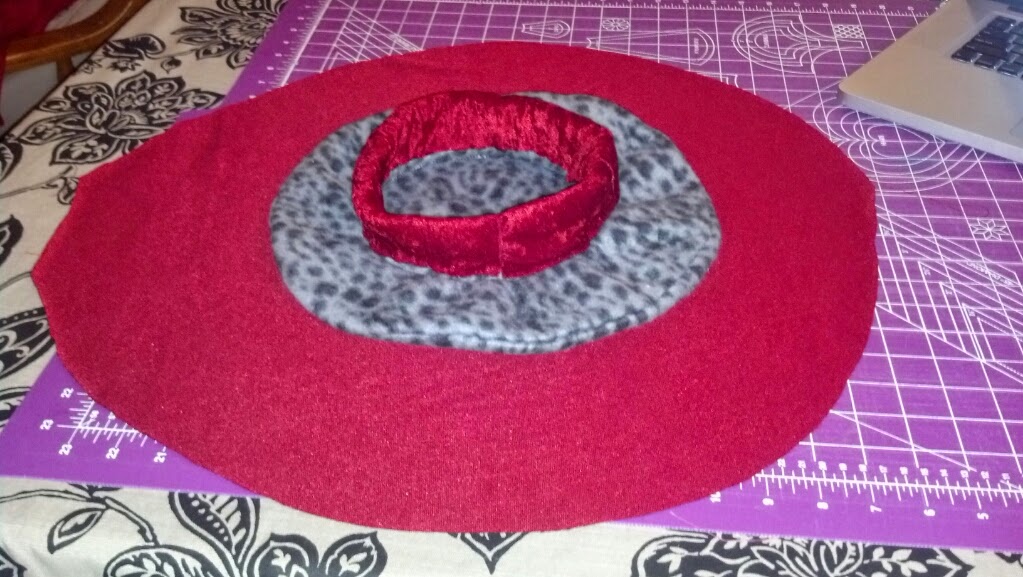 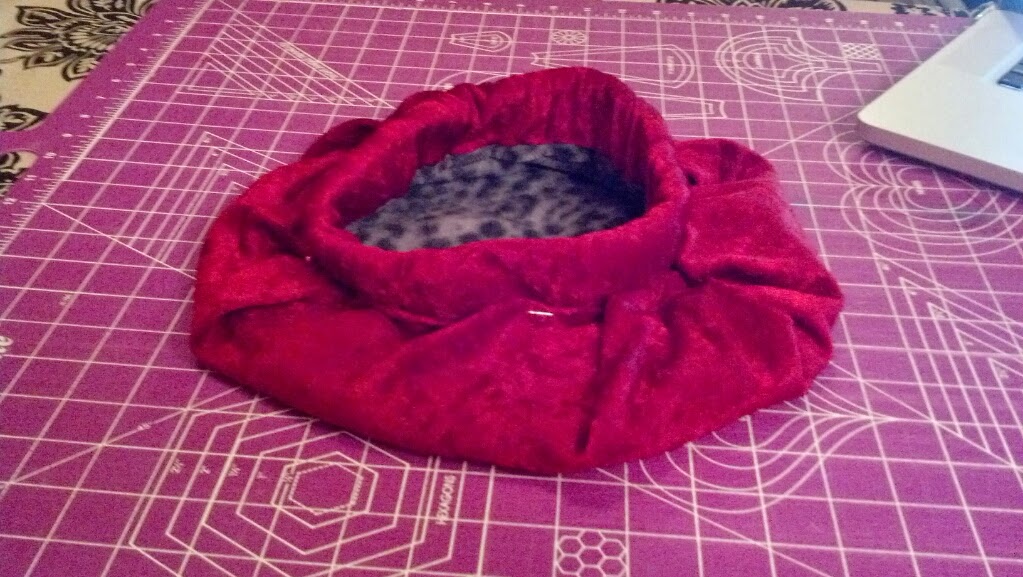 Put it all together and Will Shakespeare has entered the room!  "What's in a name?  That which we call a rose by any other name would smell as sweet."  Romeo and Juliet Act II, Scene II. 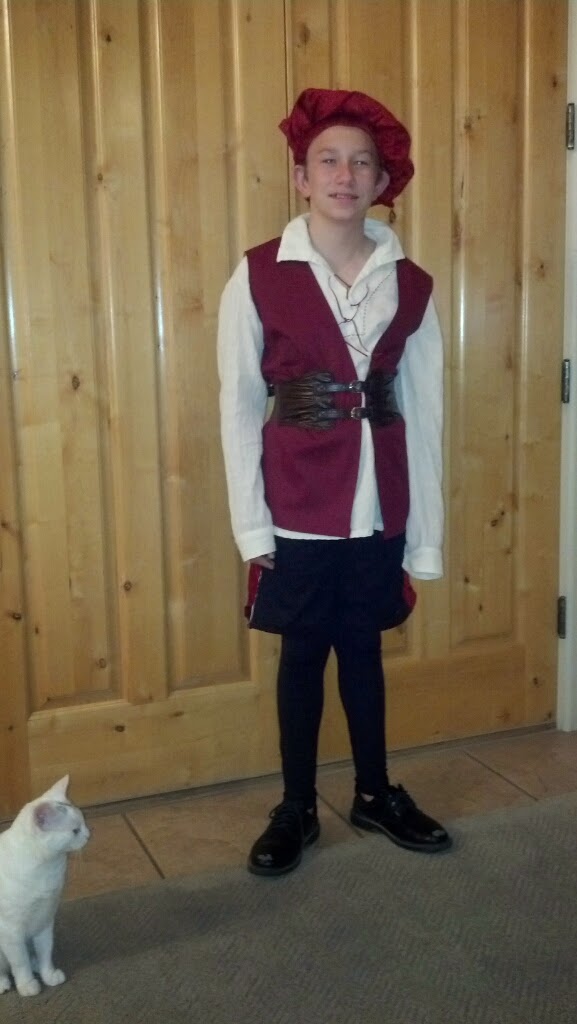 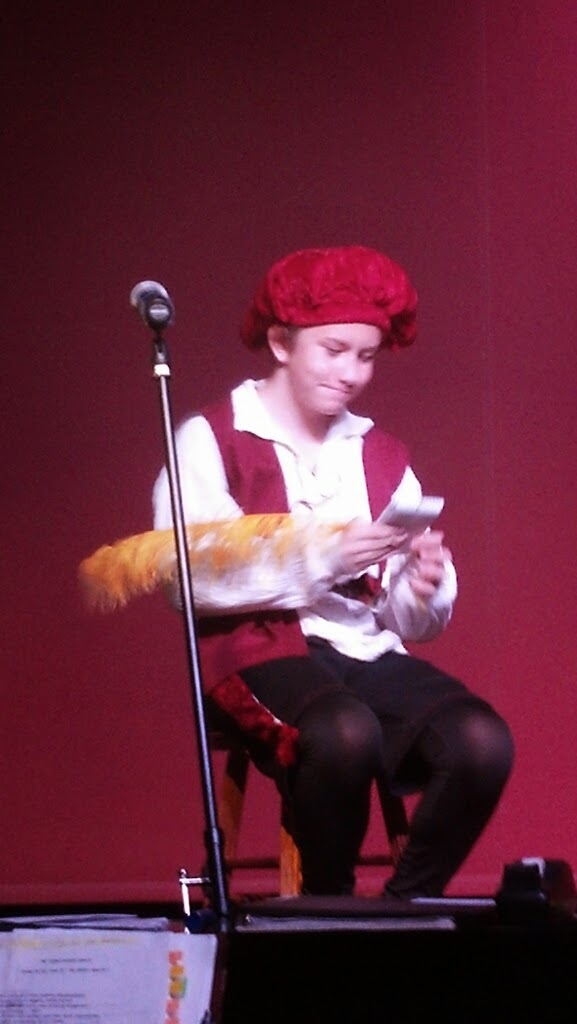 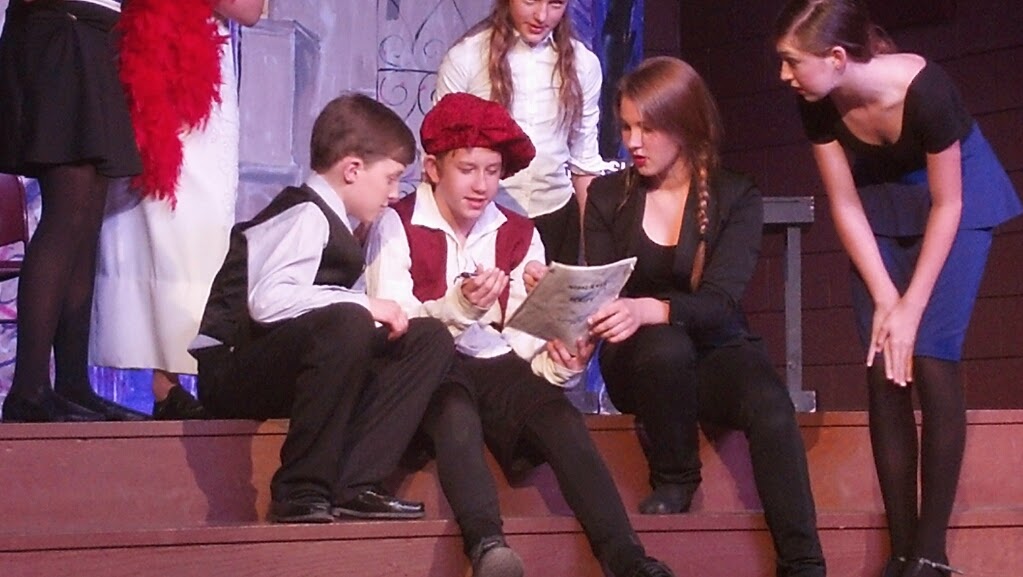 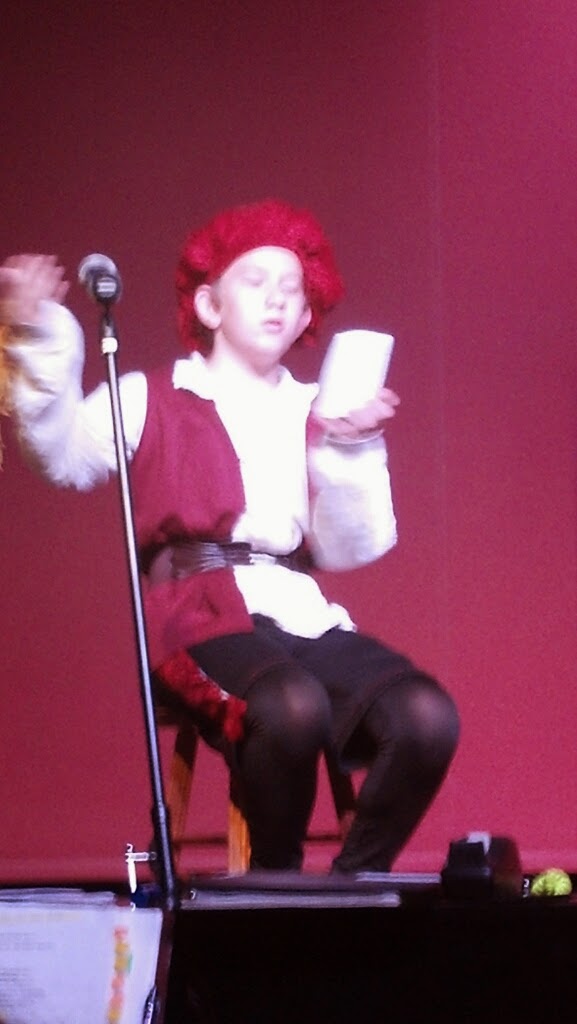 He looked great, he was awesome and I was proud of that costume!

"All the world's a stage, and all the men and women merely players.  They have their exits and their entrances; And one man in his time plays many parts."  As You Like It, Act II, Scene VII.

Once upon a time (about 1999), someone decided to write an online diary and the blog was born.  A blogger was (and still mostly is) someone who has organic ideas that are being broadcast to the Web.  Mommy blogs are especially revolutionary - women who speak to other women about common issues in childrearing, family life, household management and hobbies.  The sharing of ideas in an open marketplace in which everyone has a platform and voice was, and continues to be, an amazing phenomenon.  Soon, advertisers and the corporate world took notice that women were much more likely to listen to the opinions and enjoy reading about the lives of women just like them.  Enter the money.

When the advertisers and corporations noticed the impact of mommy bloggers, they realized that the blogosphere was an ideal place for the kind of grass roots, word-of-mouth advertising that is so powerful, so organic, so real.  So Bloggers started receiving free "stuff" to try and the product reviews and endorsements started.  All along, the point was for women to spread the word - in their own words - about goods and services they liked or tried.

Here's my problem.  As mommy bloggers we may be receiving free items or outright compensation for providing our opinions, they are still our opinions.  But are they really our opinions and thoughts?  I'm afraid we might be unwittingly losing our voice.

More and more, I'm seeing the advertising executives pushing to control the opinion, pushing to control the copy, dictating the message.  In some cases they are imitating us.  I recently saw a "petition" in support of using non-advertising search engines for use in our schools.  Guess what search engine was promoted in the "petition"?  Bing.  Sorry, that's no longer a group of concerned mommies, that's a marketing campaign.

Advertisers are learning how to sound just like us.  They are using our blogs as platforms for commercials and using us as poorly paid junior advertising executives.  I won't be surprised to discover that one or more blogs aren't really written by a mommy blogger, but are a front for an advertising firm.  The final insult?  We're doing it for free.  There is no amount of free stuff that can compensate us for opening a market with limitless potential AND for teaching them how to tap it.

Am I suggesting that bloggers shouldn't be paid for their time and effort in offering their opinions?  Should we reject brand placement or endorsements on our blogs for fear of losing our objectivity?  No.  I won't go that far.  However, I do think we need to be vigilant.  Don't sell yourself short.  Don't let a suit write the organic message.  Don't lose your voice.  It is unique and cannot be replicated as a cheap marketing method.