The Bachelorette - I Don't Get It

I know I'll probably get flamed for this, but tonight I watched "The Bachelorette" and I don't get it.  I watched the first episode where our heroine, Andi, greeted about 25 guys (I'm not savvy enough to know exactly how many).  That was interesting and fun.  I thought it was cute that she could weed through a few guys at a time.  After all, a girl should be able to know that not all 25 guys can be her "soulmate."

Fast forward a couple of weeks and she's going on "dates" with groups of guys.  I'm still with that.  It's probably fun to walk around with a group of guys following you like a pack of hungry dogs.  No, seriously, a girl can have fun in a group.  There's no pressure to focus on just one.

Again, I have to admit that I don't regularly watch this show; in fact, I've only seen about 2 episodes total and a few glimpses of another.  Tonight I noticed that Andi is down to 3 guys.  I understand - she's still dating and making decisions.  Here's where I am confused.  She's kissing and spending the night with two of the three guys, although I'm not assuming anything went on behind closed doors because then I would have to assume she's a tramp.  I don't think that badly of Andi the Bachelorette.

By the end of the episode, she's ready to take two guys home to meet the parents and she's talking about how within a week she's expecting a proposal from one of them.  I watched the face of the baseball player as she offered the rose to the cute shy guy.  He didn't look too thrilled at the possibility of losing the game.  It is definitely a reality competition.

As I watched it with my daughter sitting close by, I couldn't help but contrast it with some recent episodes of "19 Kids and Counting" in which one of the daughters found a husband.  You know, those people who are "freaks" because they have 19 kids, dress modestly and "court" before marrying?  How could a girl possibly marry a guy she's only been out with a couple of times and always with chaperones?  Now I'm not suggesting that we start lining up chaperoned dates for our daughters, but I do have to admit I was less confused watching that instead of Andi and her "soulmates."

I truly hope Andi finds the lifelong love she so desperately wants.  I'd like to think it might be one of these two guys she is taking home.  I'm just not sure a television show is the right place to look for love.  Either way, we will enjoy watching.

I just won't get it. 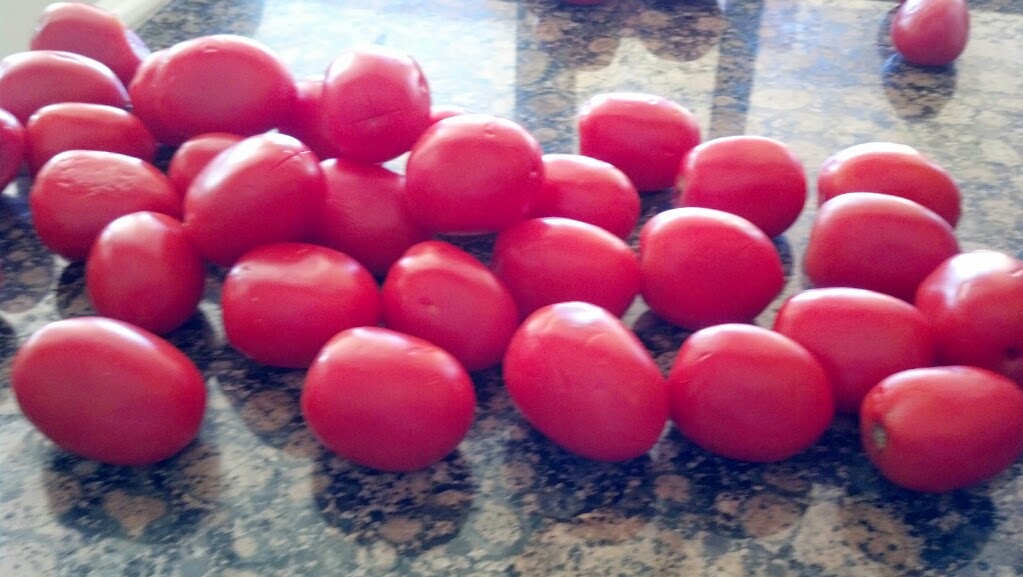 It's summer and so many people are buried in homegrown tomatoes.  I miss those big beefy tomatoes from the Midwest, but love the Roma tomatoes we get from Yuma and California.  A couple of months ago I acquired pounds (I don't even know how many) of Roma tomatoes and thought I would try some homemade tomato sauce.  I found this recipe for tomato sauce made with butter and after reading the reviews, I gave it a try.

Before making the sauce I had to peel the Roma tomatoes.  (Some people don't peel Roma tomatoes to make sauce, but I wanted to give this technique a try.)  First, score the ends of the tomatoes like this: 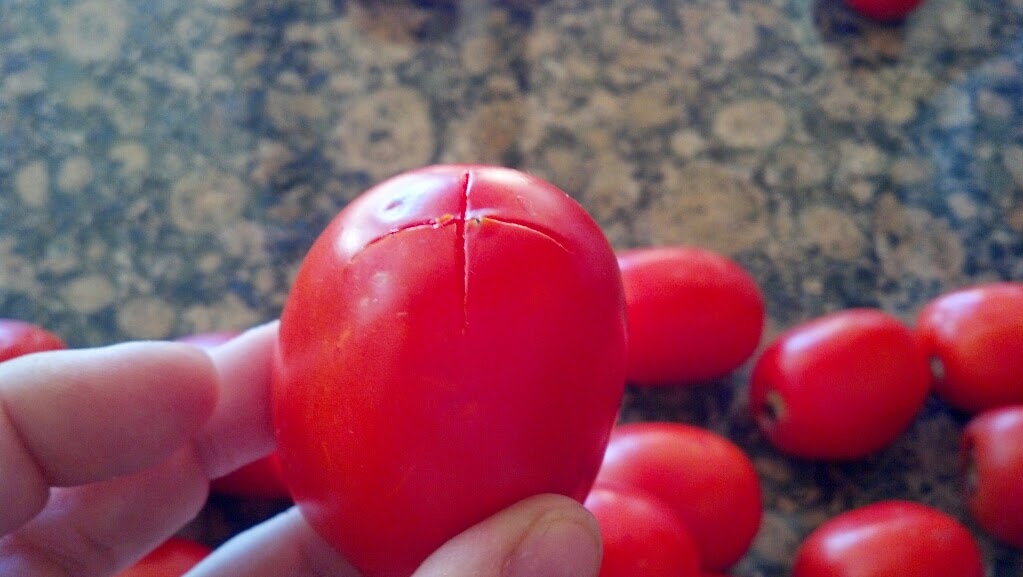 Place the tomatoes in a pot of water and heat to boiling.  Watch for the skins to slightly peel back and immediately remove the tomatoes to a bowl of ice cold water.  Leave them in the cold water for a minute or two and remove them to dry.  You've just blanched your tomatoes. 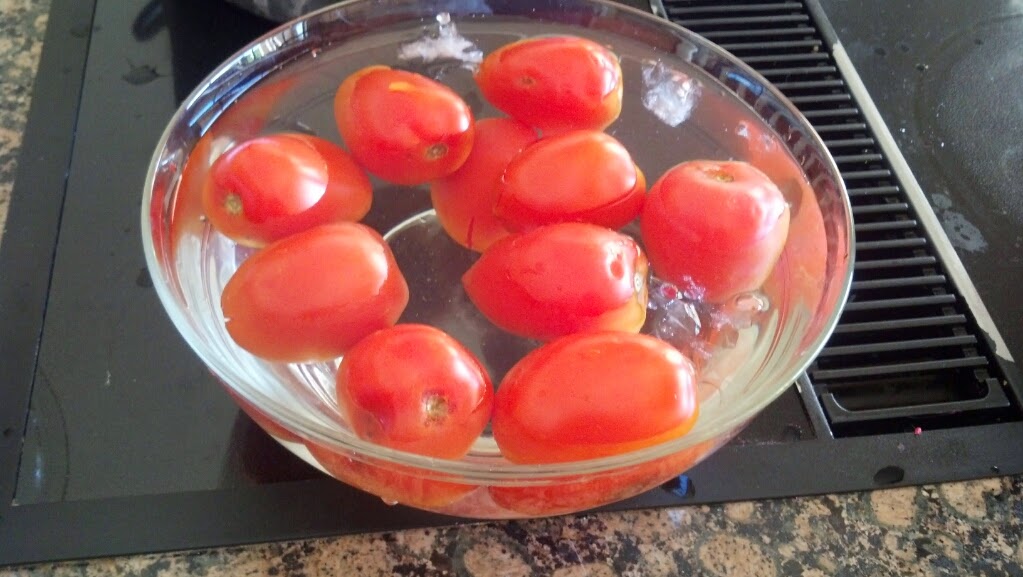 See how the ends look a little bulgy?  You are ready to peel.  Carefully pull back the peel at the places where you scored the tomatoes.  If you get stuck, score them again anywhere on the peel and pull back the skin.
﻿ 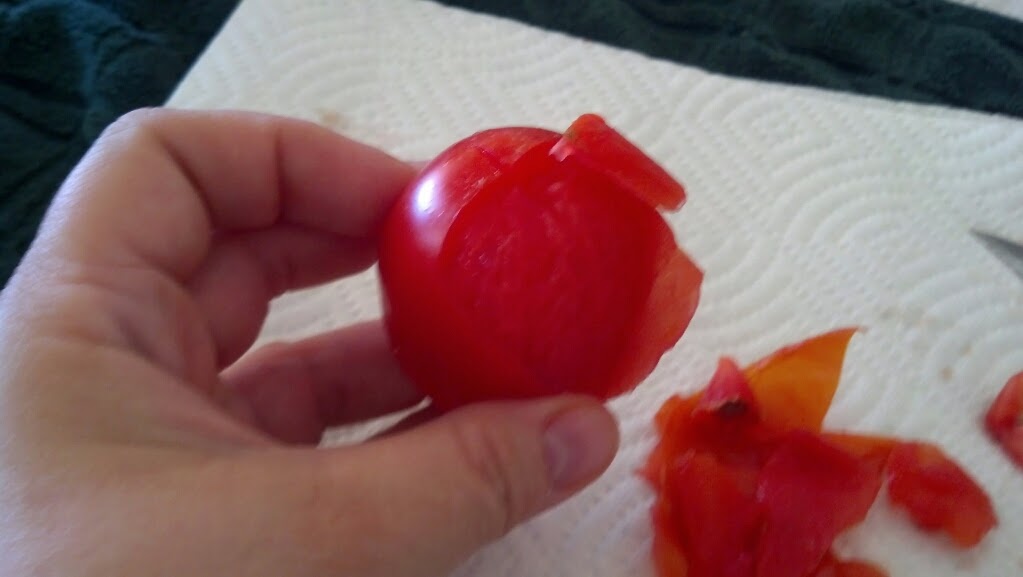 After your tomatoes are peeled, cut them up a bit or blend them if you really like smooth sauce.  Following the recipe I linked above, combine 2 pounds of fresh tomatoes with a peeled sweet onion cut in half. (Yes, you just float that onion in the pot with the tomatoes.)  Add 5 tablespoons of butter. 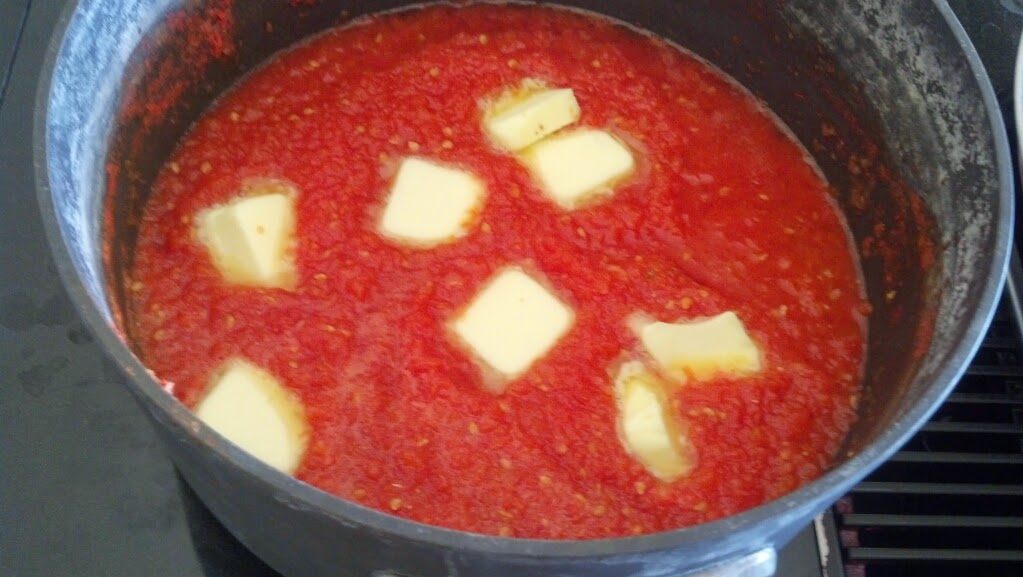 Cook it over medium heat until the tomatoes are reduced and not so watery and the butter is melted.  You won't be able to resist tasting it after the first couple of minutes and you won't believe how rich it tastes!  I added some chopped green and red peppers and minced garlic that was sautéed in a little olive oil. 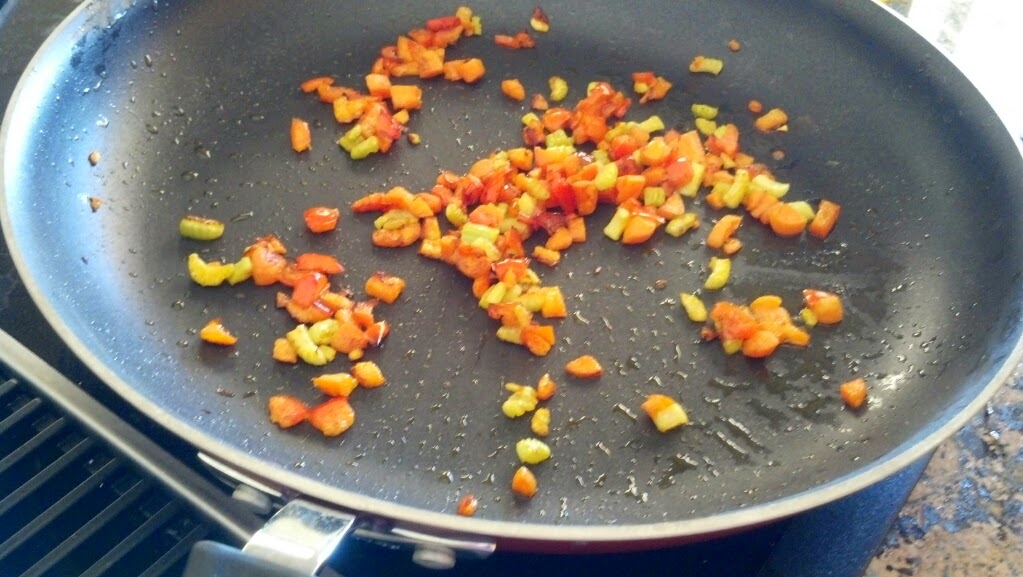 ﻿
﻿
At the end, remove the onion and you are ready to go!  It is so good and also freezes very well in Ziploc freezer bags.  Your family will love it, although you might not want to tell your older children there is butter in it because they tend to freak out over "weird" food combinations.
Enjoy those summer tomatoes!
cindy
at 4:29 PM No comments: