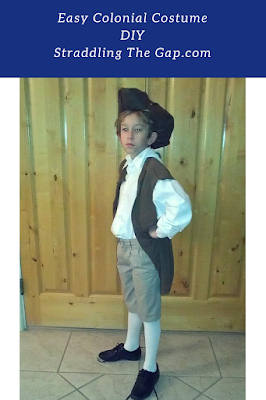 Last fall, I made the most complicated historical costume for my daughter for Halloween - never want to do that again! 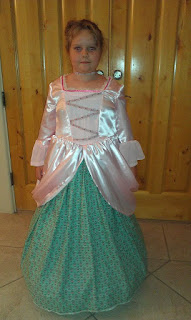 At the kids' school, the 5th grade kids always do Colonial Day, in which each kid is expected to dress in Colonial attire.  My son was pretty low key about the whole thing (let's face it, he's pretty low key about everything).  The night before Colonial Day I realized we didn't have a costume.  I ran out to Goodwill, picked up a few items, swung by JoAnns and we were in business. 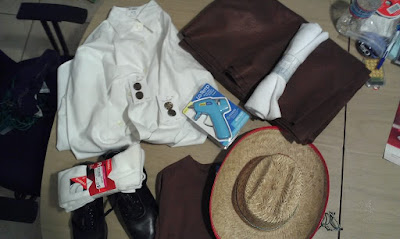 At Goodwill I found a small man's white dress shirt, a large brown t-shirt, brand new baseball socks, some black shoes and a cowboy hat.  At JoAnns I found some brown felt, a remnant of white gauze, buttons and a small glue gun.  I also had a pair of Christian's khaki school pants which still fit, but are too short.  I started by cutting them off at the knees and hemming them.  They are inside-out in this picture. 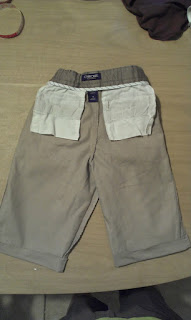 Then, I took the brown t-shirt, cut it right up the front and cut off the sleeves at the shoulder seam.  Voila - commoner vest. 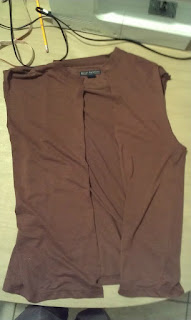 Then I took the dress shirt and cut too much of the bottom off :(  That's O.K., I cut out the middle and sewed the bottom back on.  Yeah, there's a horizontal seam on the front of the shirt, but the buttons match up and there is a nice hem in the bottom of the shirt. 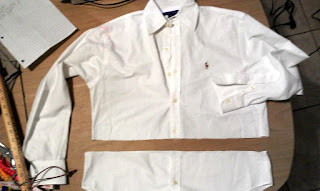 Once I fixed that problem, I cut the cuffs off the sleeves and put in elastic at the bottom so the sleeves were puffy.  I cut the gauze into a triangle for a neck kerchief.  Then it was time for the hat.  I started with this straw cowboy hat: 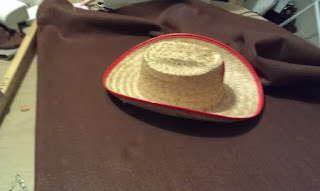 I measured the diameter of the hat across both ways (think of it like a circle that is raised in the center), and cut a piece of brown felt in the shape of that circle.  I folded the felt in half and marked an arc of the radius from the center of the circle so I could cut it. 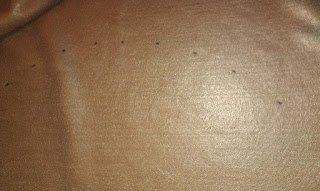 See the semi-circle marks?  Then came the fun part with the hot glue gun.  I started at the center, and working my way to the outside in all directions, I glued the felt.  There were a couple of times I cut some of the felt because it got too bulky.  I'm sure someone else could cut the felt with more precision, but by this time it was 10:30 p.m.  After covering the hat with felt, I took the brim in the front on both sides and tacked it up to the top of the hat to make a tri-corner hat.  I used quilting thread and sewed it on each side with an X.

The next morning my guy was proud to wear his Goodwill-2 hour assembly costume: 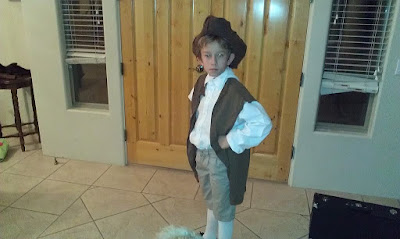 I couldn't be more pleased.  He loved Colonial Day and even brought me a gift: 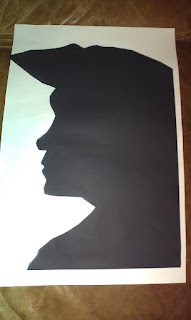 He said lots of the other kids had store bought or rented costumes, but his mom was the only one who sewed a costume :D  (I'm not sure I would hold this up as my best example of sewing.)

Victory for the crafty working mom!!